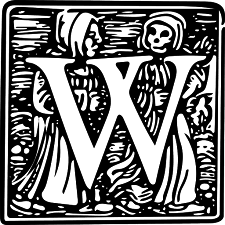 E TEND TO THINK of the early years of the Middle Ages as a dark and empty time, The Dark Ages, so-called.  However in actuality this was a period of great agricultural innovation, including advancements in the development of the plow and in the means of rigging draft animals to the plow.

Horses, for example, in Roman times couldn't pull the plow.  The Roman yoke was suitable only for oxen.  Consequently, first-century Italy couldn't grow enough food to feed itself.  Rome depended on Egypt for grain. 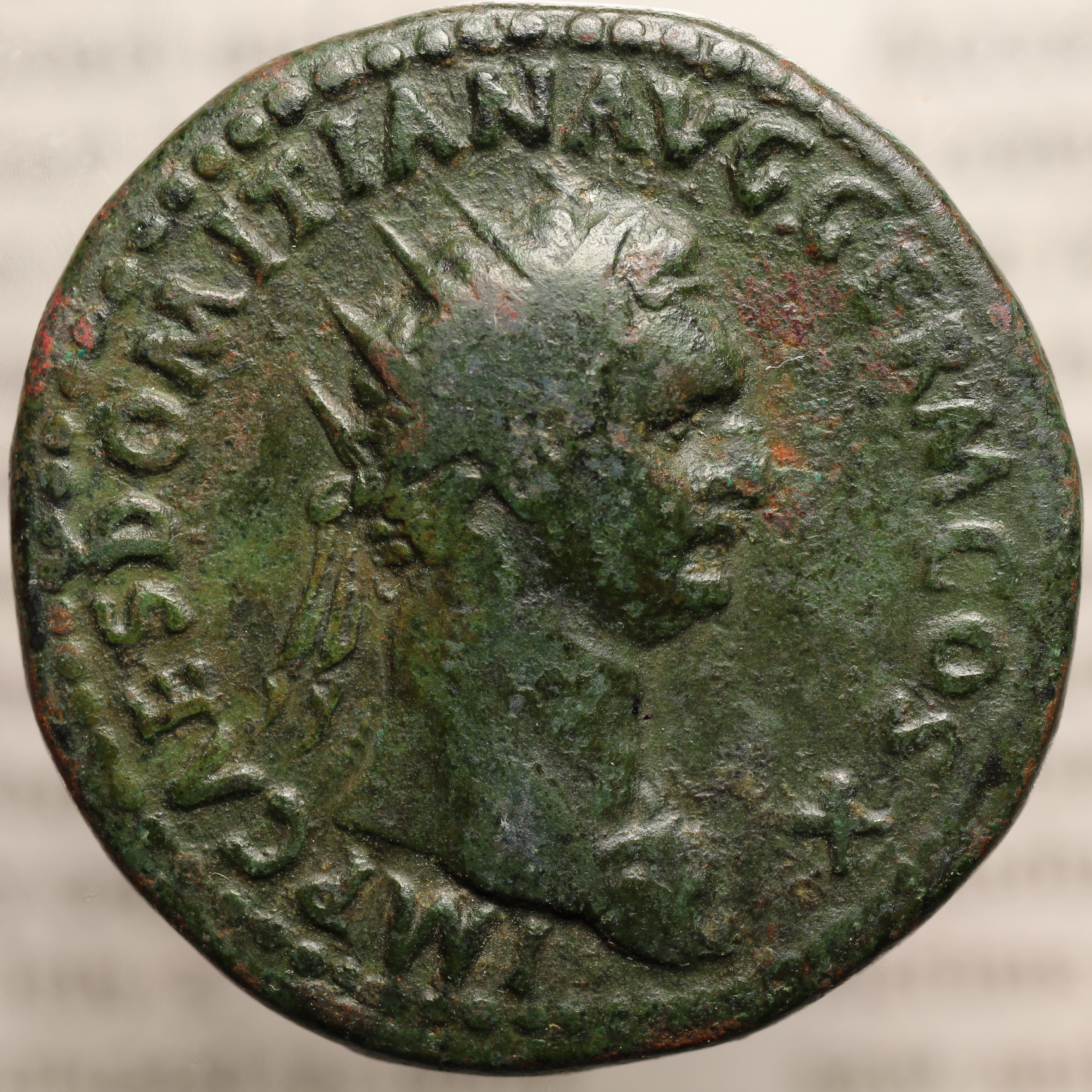 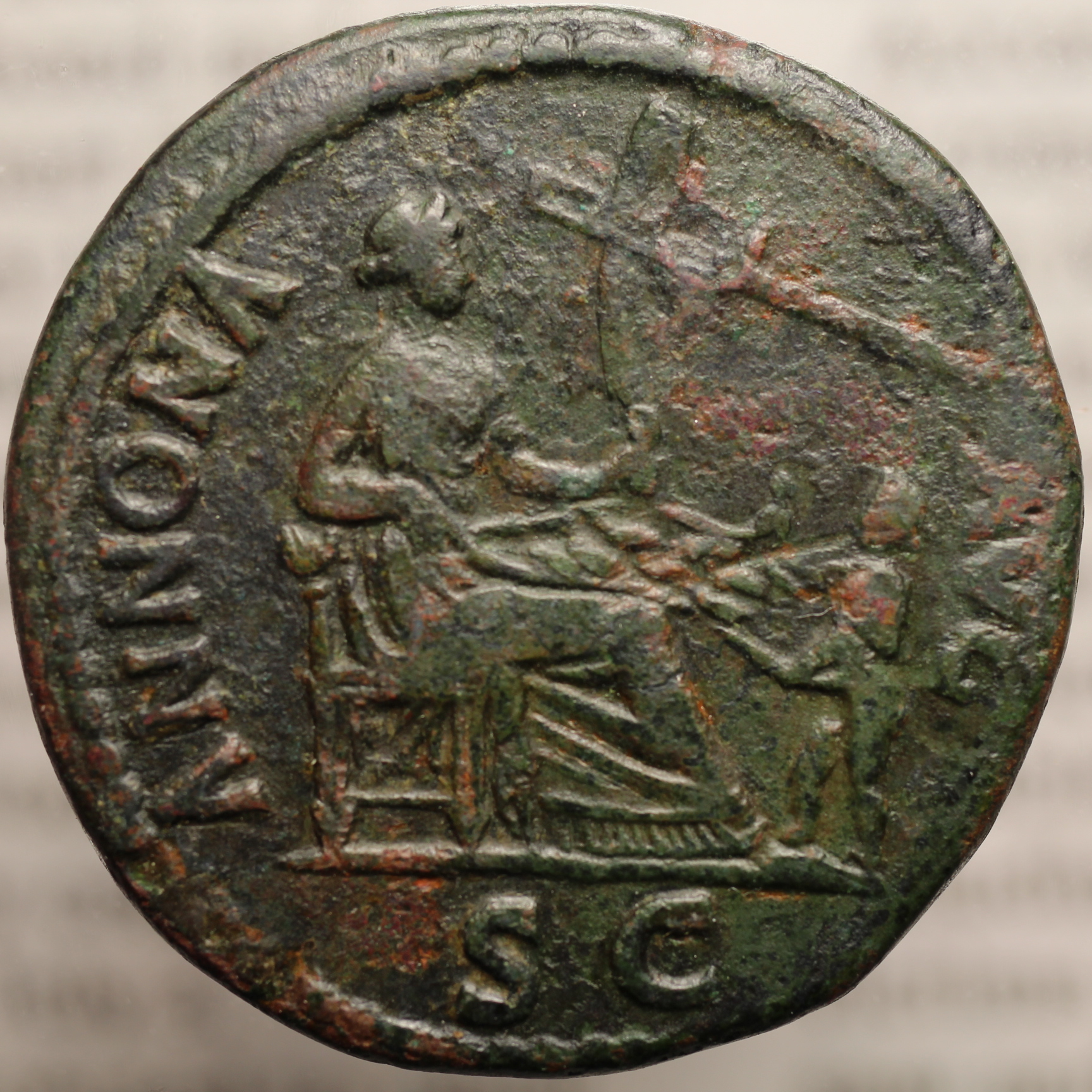 On the reverse is Annona, the seated allegorical figure of a woman, distributing the bounty on her lap to another allegorical figure, the figure of a child.  In the background is the prow of a ship at a crazy slant.  This last piece of information illustrates the unlading process.  Ships were hauled to the ground and tipped over, dumping out the grain.

The child represents the people of Rome.  Sometime ago I read in an online discussion the suggestion that this child was actually a portrayal of Domitian's own son who apparently died in infancy.  This is an interesting idea, but I can't imagine how such a thing could be proven.

Annona herself is an allegory.  In time she would be worshiped as a goddess, but she started out as the representation of the free bread dole given to Roman citizens. Her appearance on this reverse referred specifically to the annual importation of grain by ship from Egypt, annus, meaning year (per annos=annual or yearly), with the Latin suffix -ona, an intensifier; thus "The Big Yearly," commencing regularly on March 5.

By the time of the Severans there would be an actual festival celebrated on this date, the Navigium Isidis, which included a parade to welcome the first ship.  It's possible that this festival began with the Flavians, with Vespasian or either of his two sons, because all three of them had special sentimental or actual ties with the ancient religion of Egypt, particularly with the goddess Isis.

Does this mean that RIC 213 was a commemorative coin issued annually in March to celebrate a specific event?  No--sadly, because that would indeed be very cool.  The following year, 85 A.D., is conveniently divided (for coin collectors) into three separate strikings in bronze due to the various stages of Domitian's award of Censorship.  The Annona reverse appears in all three strikings, so evidently it was issued throughout the year.

This coin is one of a small number I have purchased out of the estate of Thomas Bentley Cederlind.  Since I'd never seen most of these coins offered for sale in any of his fliers, my guess is that they come from his own personal collection.  In every instance they are all special or unique in some way or other.  The coin under consideration this week, for example, is extremely rare, R2.

I didn't know Tom except through telephone conversations.  He once suggested that I read Juvenal.  This suggestion wasn't necessary in my case, but it was an astute recommendation befitting the circumstances and impressed me quite a lot.  Apparently he once wrote a paper about the evidence of damnatio memoriae on the coins of Domitian.  I would love to read it, if anybody knows whether or not it was ever published.  It's something I now look for in my coins, thanks to Tom Cederlind, and I will be writing an upcoming article about the subject myself.

Next:  Something about an interesting provincial coin.