An Assarion from NicaeaDomitian RPC 644 var; and United Airlines sucks 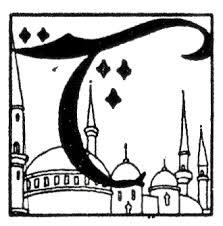 HIS LITTLE COIN from the city of Nicaea in the Roman province of Bithynia and Pontus is sort of Christmas-related.  Because it was at the Council of Nicaea in 325, where St Nicholas (Santa Claus) beat the crap out of the heretic Arius with a stick.  Of course, this particular coin was struck much earlier than that, between 83 and 96 during the reign of Domitian-- 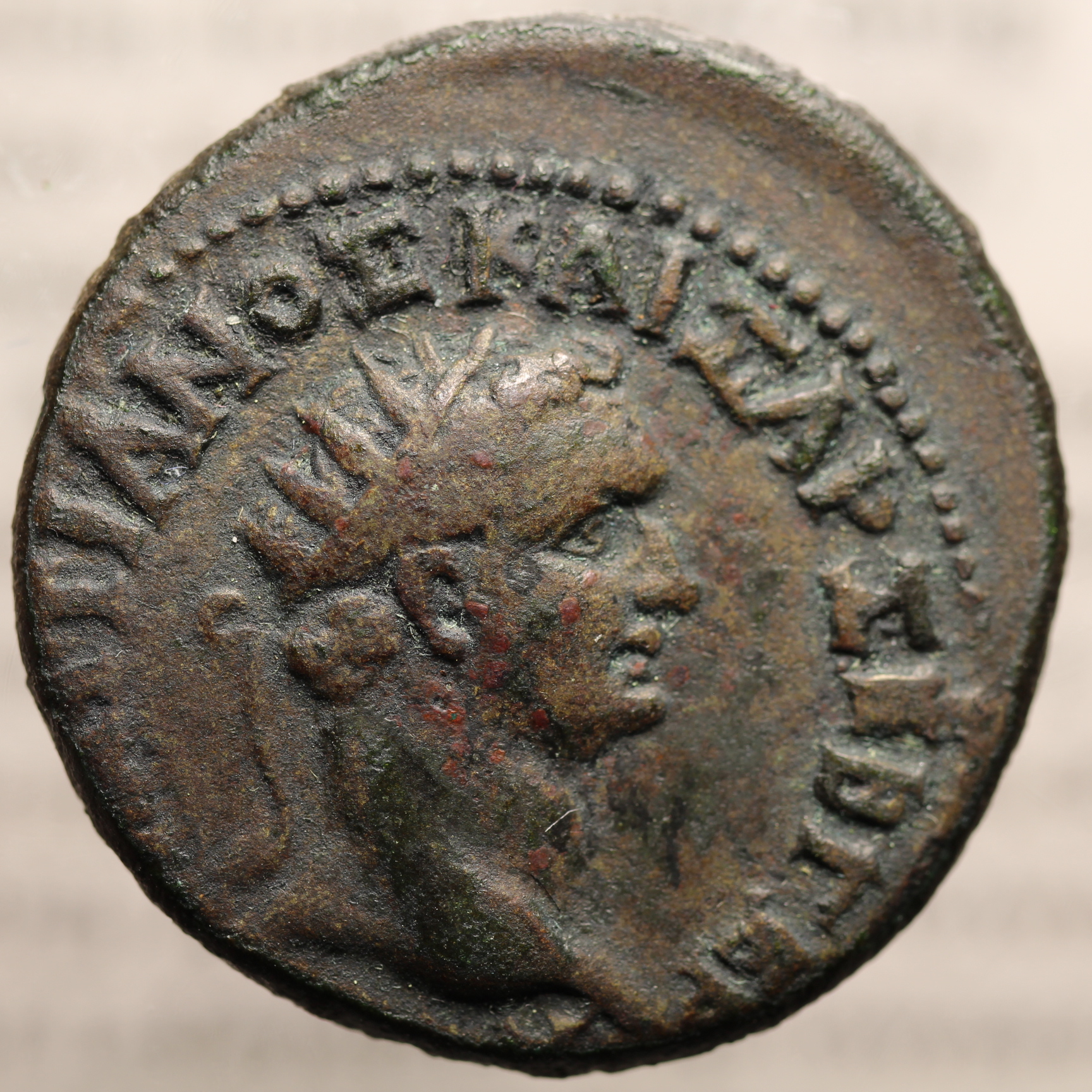 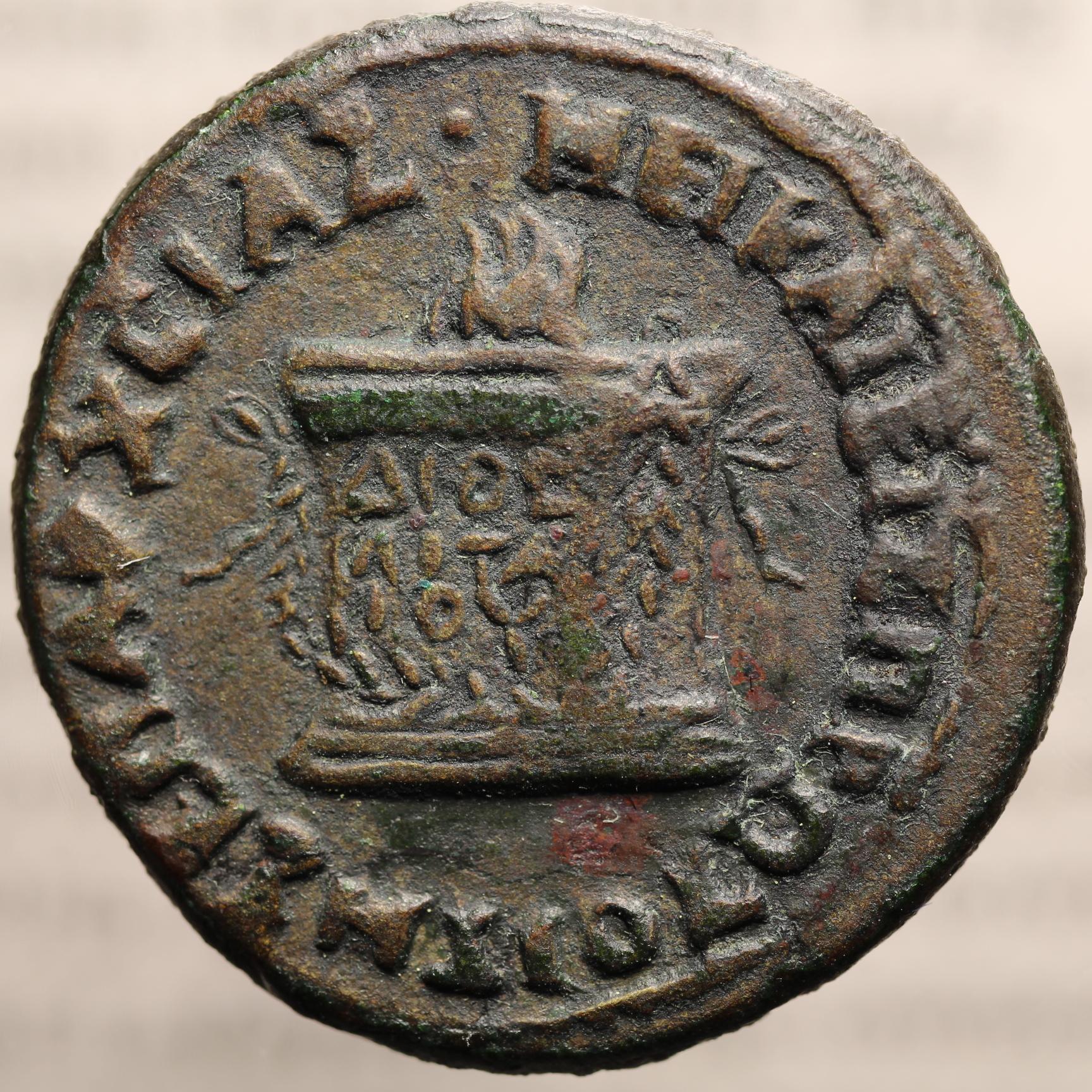 What's interesting here, besides it being the nicest example of RPC 644 I have ever seen, are two things.  The inscription on the altar is legible, and Domitian is wearing a radiate crown.

The radiate crown instead of the standard laureate crown is what makes this a variant.  Anther coin of the same assarion denomination has a radiate crown variation recorded (RPC 642/643), but RPC 644 does not have that published variant.  Perhaps it is unknown until now.

The altar inscription here is important because of what RPC says about its own bold-faced plate coin, P[aris] 816--

"Inscription on altar is not clear.  Rec suggested ΔΙΟΣ ΑΓΟΡΑΙΟΥ.  One might expect ΔΙΟΣ ΛΙΤΑΙΟΥ, which is found with an altar on Nicaean coins of Nero and Vespasian (RPC I, 2053, 2055; cf. 2, 710), but traces of letters cannot easily be made to give this reading."

The altar inscription on my coin clearly reads ΔΙΟΣ ΛΙΤΑΙΟΥ, ΔΙΟΣ/ΛΙΤΑ/ΙΟΥ, all inscribed on the left-hand side of the altar.  When you look again now at RPC's plate coin, using my coin as a template and ignoring the marks on the right-hand side of the altar, you can see it on the Paris example too, at least in places.

I'm 62 years old and I never thought I'd see Venice again.  Last time, in the spring of 2015, I flew home Economy Class, wedged in the middle seat in the back of the plane, with a headache and sick to my stomach, breathing in the heady effluvium of the adjacent lavatories.  It was a foretaste of Hell, and since my own final destination is Heaven I felt I really didn't need a preview of that other place.  "Never again," said I.  "I am way too old for this."

The "never again" pledge lasted maybe a year.  And then I started planning for my next trip.  I wan't too old for Venice.  What I was too old for was Economy Class.  Instead of going to Venice every year, sometimes twice in a year, what if I went only every other year, but Business Class!  Factoring in all the various expenses of the trips I would be skipping in the interim in addition to the plane tickets, the hotels, the pricey Venetian restaurants, etc., the end result wouldn't cost too much more than what I'd already been paying all these years.

So that's what I did this month (and the tail end of last month).  Six legs, the first three with Air Canada getting there (to Rome for a week first with a First-Class train ticket to Venice); the last three with Air Dolomiti, Lufthansa, and United, returning home from Venice; the first five legs, Business Class; the last United Airlines leg, for whatever reason, First Class.  Here is my boarding pass for the United flight, Newark to Minneapolis-- 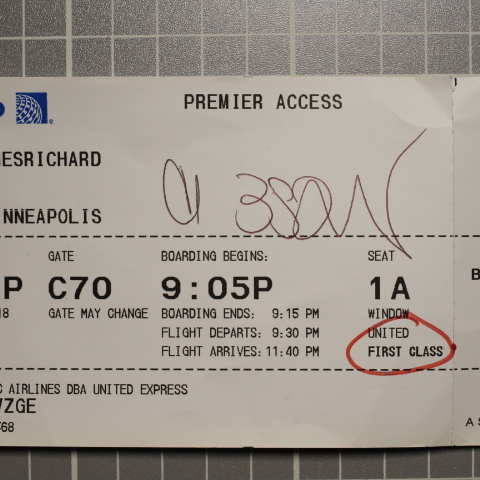 Air Canada was great.  Air Dolomiti, also great.  Lufthansa was great.  United Airlines was terrible.  I would like to review that bad experience today.  But first I should provide a little background which will set up one of the in-flight incidents--

I had purchased a bottle of olive oil, 500 ml, a present for my mother, at the duty-free shop at Marco Polo before departing Venice, 20 EURO marked down to 13.  The bottle, which was made of dark glass to protect the olive oil from sunlight, was sealed in a special tamper-proof plastic bag.  I packed it in my overhead carry-on and forgot all about it.

After the customs check in Newark there's a point where you check back through to the departure gates.  I suppose it was here at the priority check-in where at least one of my future problems with United Airlines began.  Here I was informed that my little bottle of olive oil was to be confiscated.  Apparently the dark glass of the bottle had pinged.  Twice.  Never mind that it had, until that point, been secured behind tamper-proof plastic, like a dog entitled to only one free bite, my mother's olive oil was entitled to only one free ping.  According to the TSA, Newark, New Jersey, was to be its final destination and not Eau Claire, Wisconsin.

As soon as he arrived I said to him, "Look, I'm a disabled vet," showing him the ID proving this," and I would sooner cut off my own head than do anything that might harm my country."

"First of all," he said, "thank you for your service.  Second, when does your flight leave?"

In two hours, I told him.  Okay, he said, why don't you go ahead and check your overhead bag through to Minneapolis.  That way you can keep your olive oil.  As soon as he said this, the entire crowd of TSA people clustered around us mysteriously dispersed.  It was almost a Christmas miracle how quickly that happened.

So I did what he told me.  I own one of those little old-fashioned flight bags, which I always pack in my overhead carry-on.  It's big enough to hold a pair of slippers, a deck of cards for playing solitaire, my iPad and my noise-reducing earphones, and that's about it.  It's smaller than a lady's purse and I have always taken it out of the overhead to use in the cabin during flight.  It fits snugly on my lap and it has never given me or anybody else any trouble.  Consequently to my story, I remembered to remove it before I checked my regular carry-on.  I packed my iPad into the little flight bag along with my slippers, and sent my overhead carry-on on to Minneapolis with the rest of my stowed luggage.

Of course, since my mother's olive oil had pinged twice all of my checked luggage as well as my little flight bag were automatically subjected to a closer scrutiny and upon my return to the TSA checkpoint I was entitled to an invasive body search, free of charge.  However, my complaint isn't with the TSA, hard-working individuals doing a difficult and thankless job, God bless them!  They were great.  I would hate to have to add to their burden by forcing them (by any off-hand comment I might inadvertently make about their Newark performance) to have to add my name to any future no-fly list.  So they were great.  Every one of them.  Just great.

Then I encountered United Airlines for the first time.  There was still a couple of hours to go before my flight.  The only thing in the world I wanted at that moment was a glass of orange juice, to put my feet up, and the chance to email my family that I was back in America, safe and sound.  There is a place at the Newark Airport, run by United, called the Polaris Lounge.  Perfect.

Unfortunately they wouldn't let me in.  This lounge is for international travelers only, they said.  Fine, I said, I just got back from Venice.  Did you fly with United? they asked.  No, United doesn't fly out of Venice, I said.  Then you can't come in, they said.  But I'm flying United now.  Nope, sorry.

Not even with a First Class ticket on a United Airlines flight, having flown to Newark internationally with their own "alliance partners."  They did suggest that I try the United Lounge, which was right next to my departure gate.  Of course that lounge wouldn't let me in either.  For the same reasons.  No orange juice, no feet up, no quiet place to write my emails.  Merry Christmas.

The area assigned to me on the airplane, seat A1, was about the size of a child's coffin.  There was one small window, partially blocked by my seat, which I had to crane my neck to look through, and a lot of bare wall.  The bulkhead directly in front of me had been pushed back several inches to make room for a closet, so there wasn't any room to stretch my legs; had I flown Economy Class there would have been at least the space under the seat in front of me.

United Airlines must give their flight attendants extra credit for inconveniencing their passengers.  Our cabin crew consisted of two very unpleasant hatchet-faced women from Chicago.  The first one took our drink orders.  I asked for a tomato juice with black pepper.  She was shocked by my request and announced with glee and triumph that this plane didn't carry black pepper.  She then confiscated my little flight bag and stowed it three seats behind me, making ugly comments about how people ought to know better than to try to get away with holding suitcases in their laps during take-off.

Once we were air-born, I retrieved my little flight bag, with difficulty since my walking stick was stowed in the overhead under other people's things (not specifically United's fault about the cane since nobody lets me keep it during the flight--I don't know why not), and began watching an episode of The Office that I had saved onto my iPad.  Since I had neglected to transfer my noise-canceling earphones from my overhead bag before checking it through, the sound was turned off and I was watching the show with sub-titles.  Let me say that again.  The iPad was set on "mute," the sound was turned off.  At this point the second hatchet-faced flight attendant, who hadn't bothered to make my acquaintance before now, told me that I needed to use earphones or else turn off my iPad.  I tried to show her that the machine was on mute, but she wouldn't have any part of it, insisting that she was hearing music from "somewhere."  I turned off my iPad and stared instead at the bulkhead looming in front of me until Minneapolis, having also neglected to transfer over my deck of playing cards.

By the way, internet was available on the flight but it wasn't free.  If I recall correctly it was seven dollars for half an hour.  Perhaps the second lady might have let me use my iPad for that, but I never bothered to find out since I wasn't about to pay United Airlines seven dollars for the privilege.

One final point, which really says it all, I think.  On Air Dolomiti, Business Class from Venice to Munich, 190 miles (306 km), a flight of a little more than half an hour, we were served a delicious cold-meat salad by pleasant, smiling people.  On United Airlines, First Class from Newark to Minneapolis, 1010 miles (1620 km), a flight of over three hours including the time wasted on the tarmac, we had our choice of a package of Oreos or a bag of chips.

In sum, United Airlines has left me, the kindest and the mildest of kind and mild men, with the desire to beat the crap out of them with a stick.  Merry Christmas.  Think about it, if this is how United Airlines treats their First-Class prisoners, what about the poor gen pop in the back of the plane?  I'm guessing that their fate was far far worse, probably something involving thumbscrews.

Soon:  The Rhinoceros in the Room: Domitian quadrantes, RIC 248-251