Corr vs VarRIC 4, and a return to Domitian's First Commemorative Issue

He had dreamed that Minerva, whom he worshiped with such superstitious devotion, had abandoned her sanctuary and announced that she couldn't protect him anymore because Jove had disarmed her. 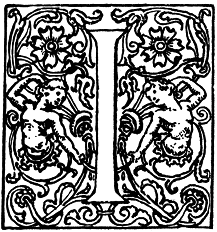 F I SPENT HALF THE TIME reading my Bible as I do poring over my two small-b bibles, I would certainly be the better man for it.  RIC (Carradice and Buttrey, The Roman Imperial Coinage, Volume II--Part 1, 2nd ed., London, 2007) and RPC (Andrew Burnett, Michael Amandry, and Ian Carradice, Roman Provincial Coinage, Volume II, London, Paris, 1999), so much respect do we all have for these two books that we have adopted their descriptions word for word when buying or selling our ancient coins and their numbering systems for putting our collections in order without so much as a second thought, and not because they were the only game in town either.  (There is Cohen with his alphabetized reverse inscriptions and the various BMC catalogs with their intricate provincial meanderings through the various ancient kingdoms, to cite just two possible alternatives.)

However, despite our respect, we have to admit that errors crop up in these references from time to time.  Speaking personally, whenever I spot such a blunder I can be quite gleeful about it, one of my many character flaws, I'm sure.  Here is one from RPC, RPC 1687 corr-- 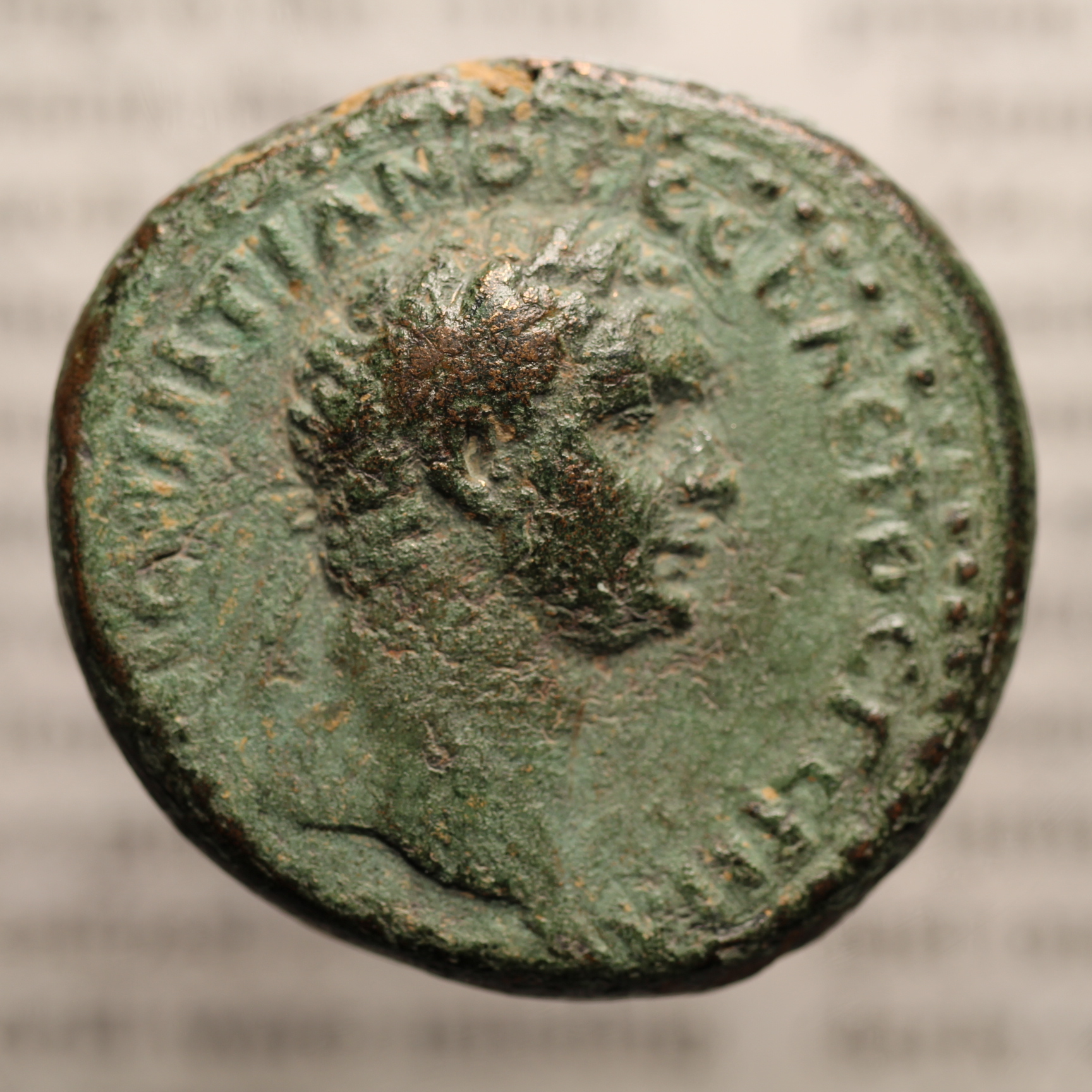 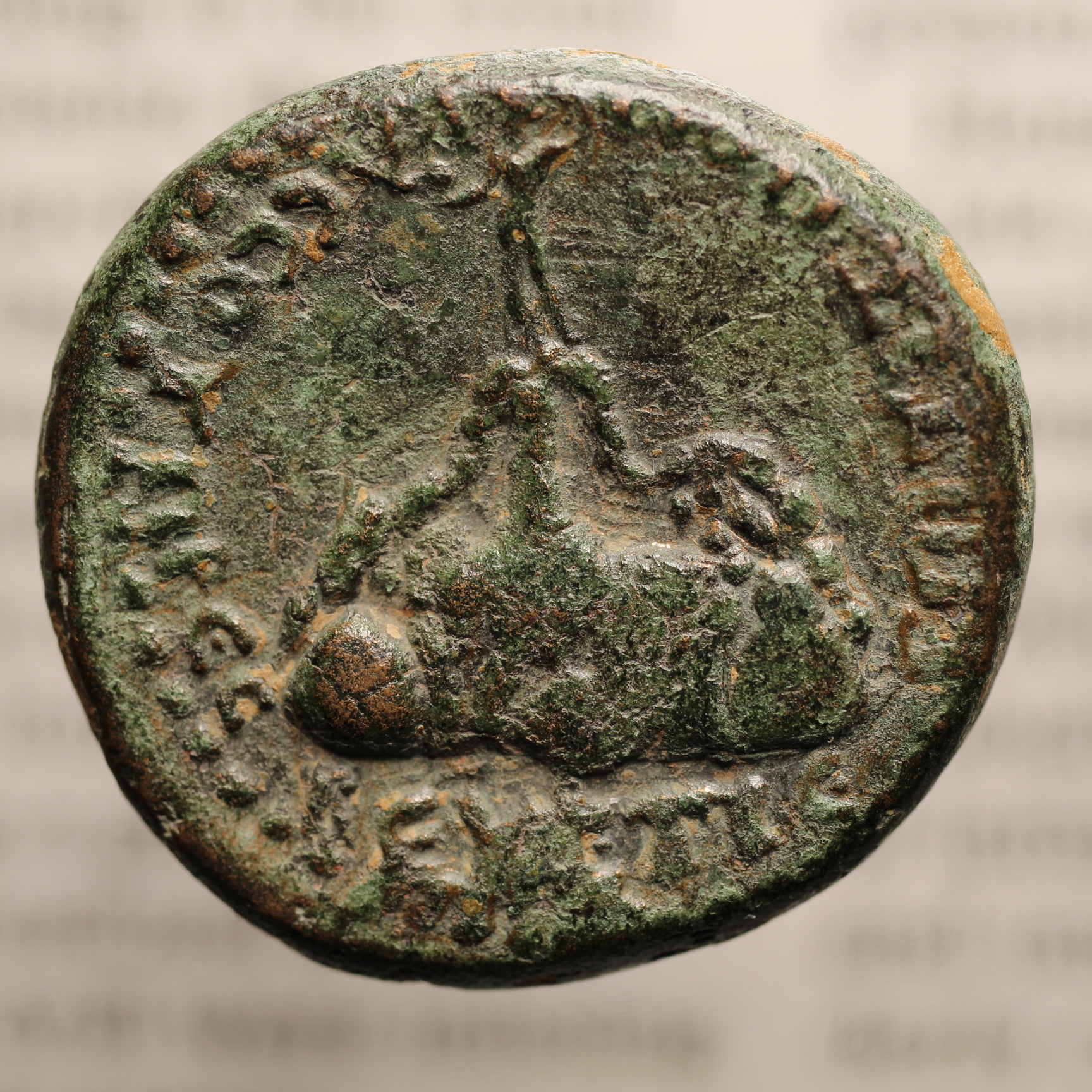 Why is this a "corr" (corrigendum) and not a "var" (variant)?  Because every example, including the illustration in the book, reads ET IE.  There isn't any example anywhere reading ET EI. 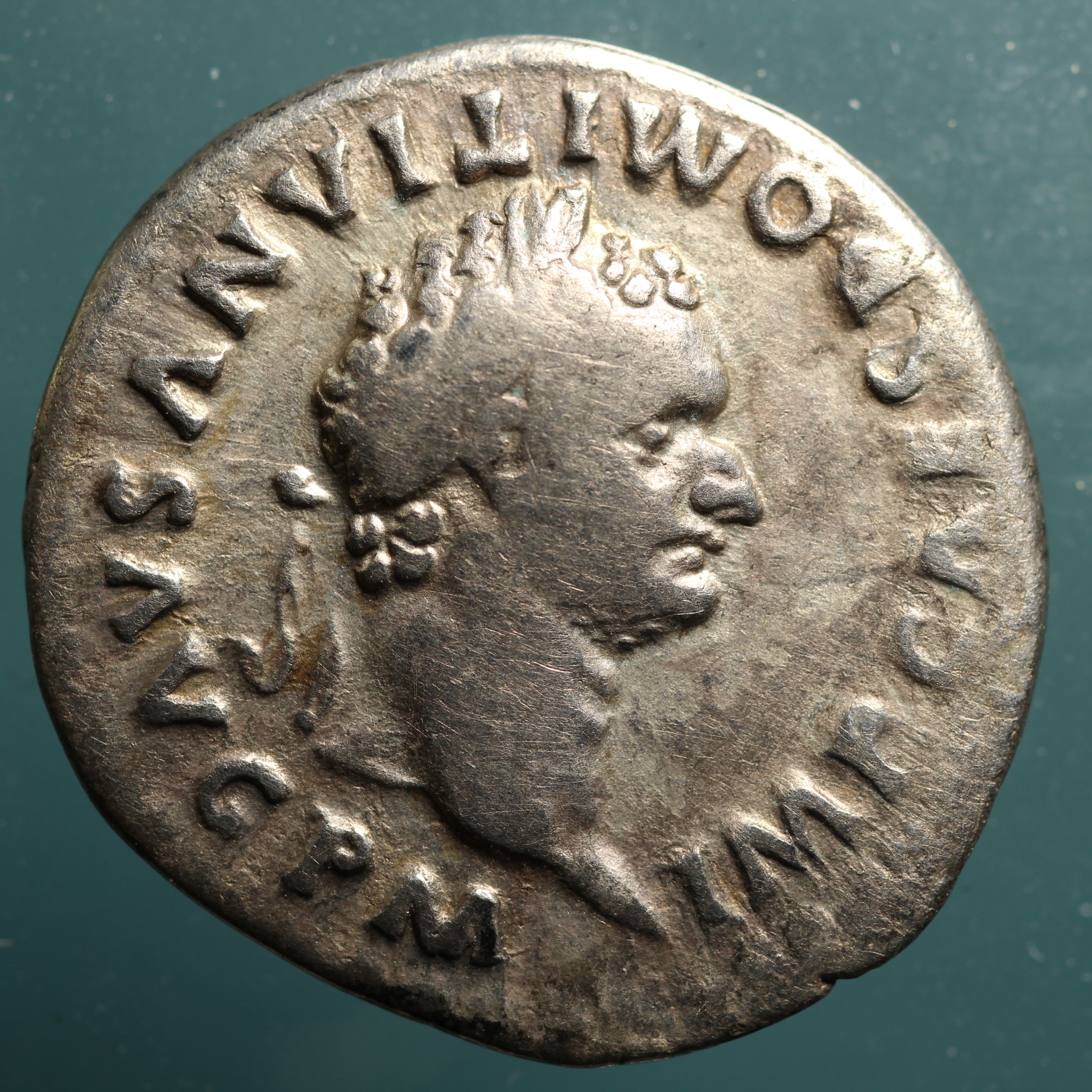 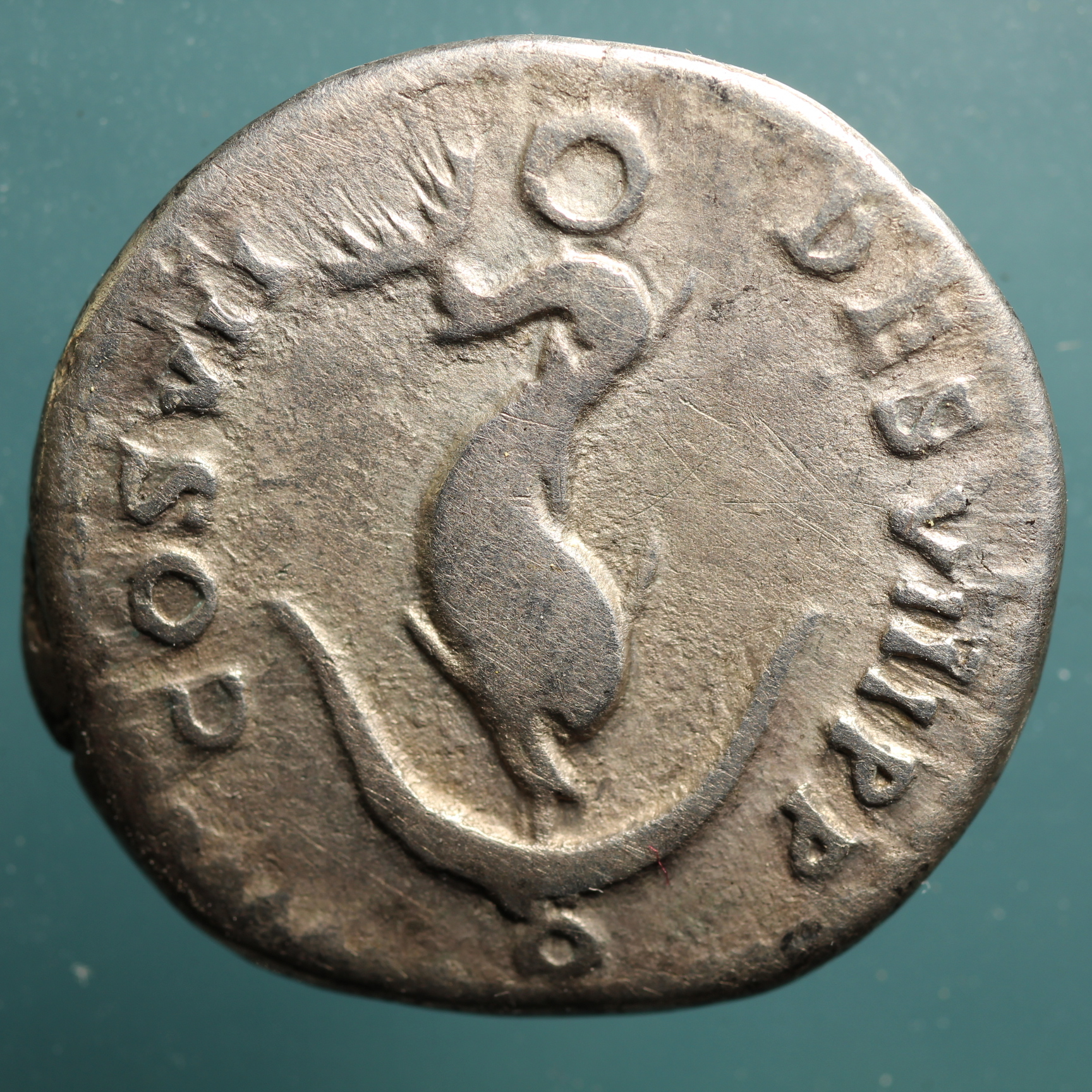 RIC records the die axis for Group 3 coins as 6 o'clock.  However the die axis of this particular coin is 11 o'clock.  This coin's reverse is upside down.  Is it a corr?  No, many of the reverse orientations for this type are 6 o'clock as recorded, so this coin is a var.  (For more about the upside down dolphin read my article from June 17, 2018, on this website.) 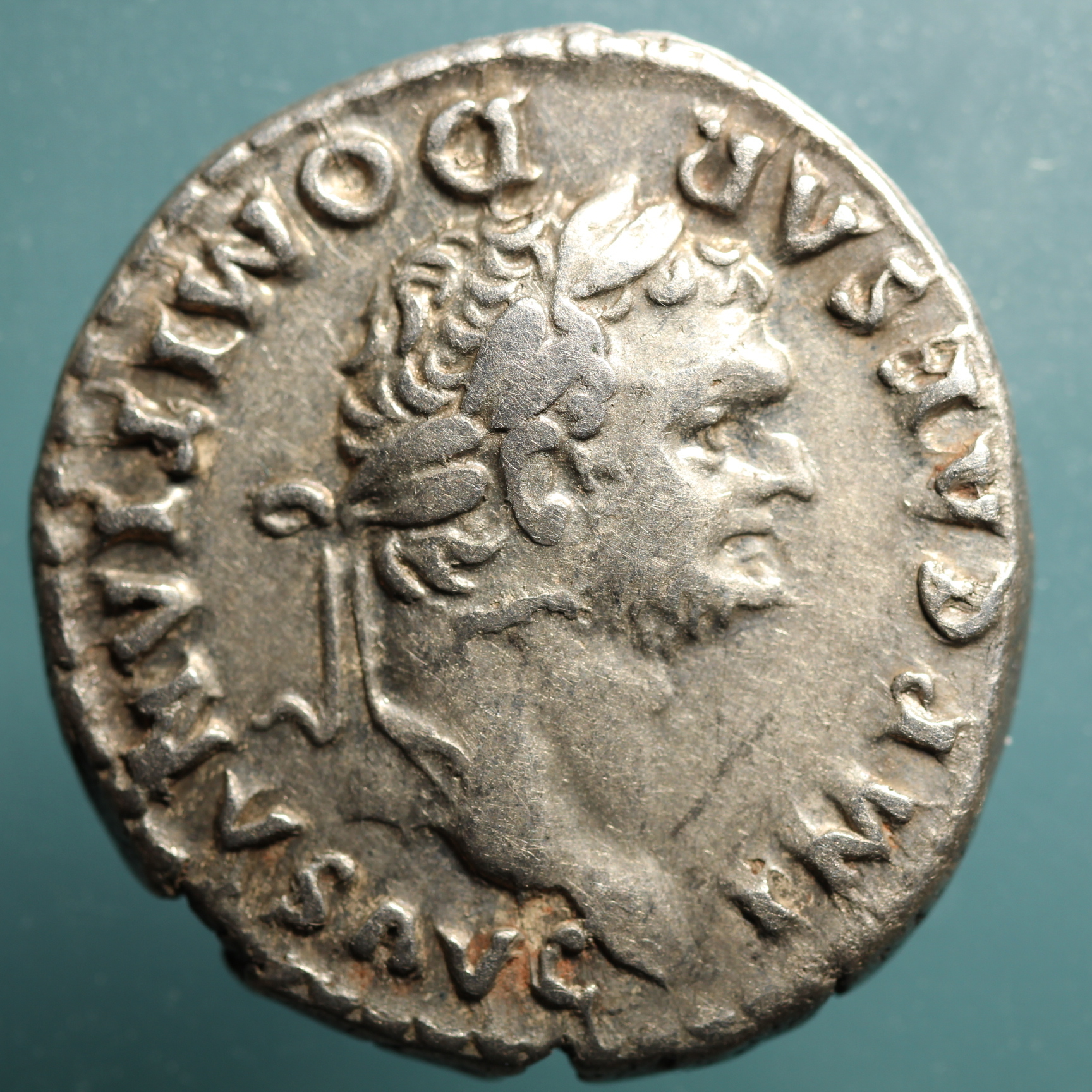 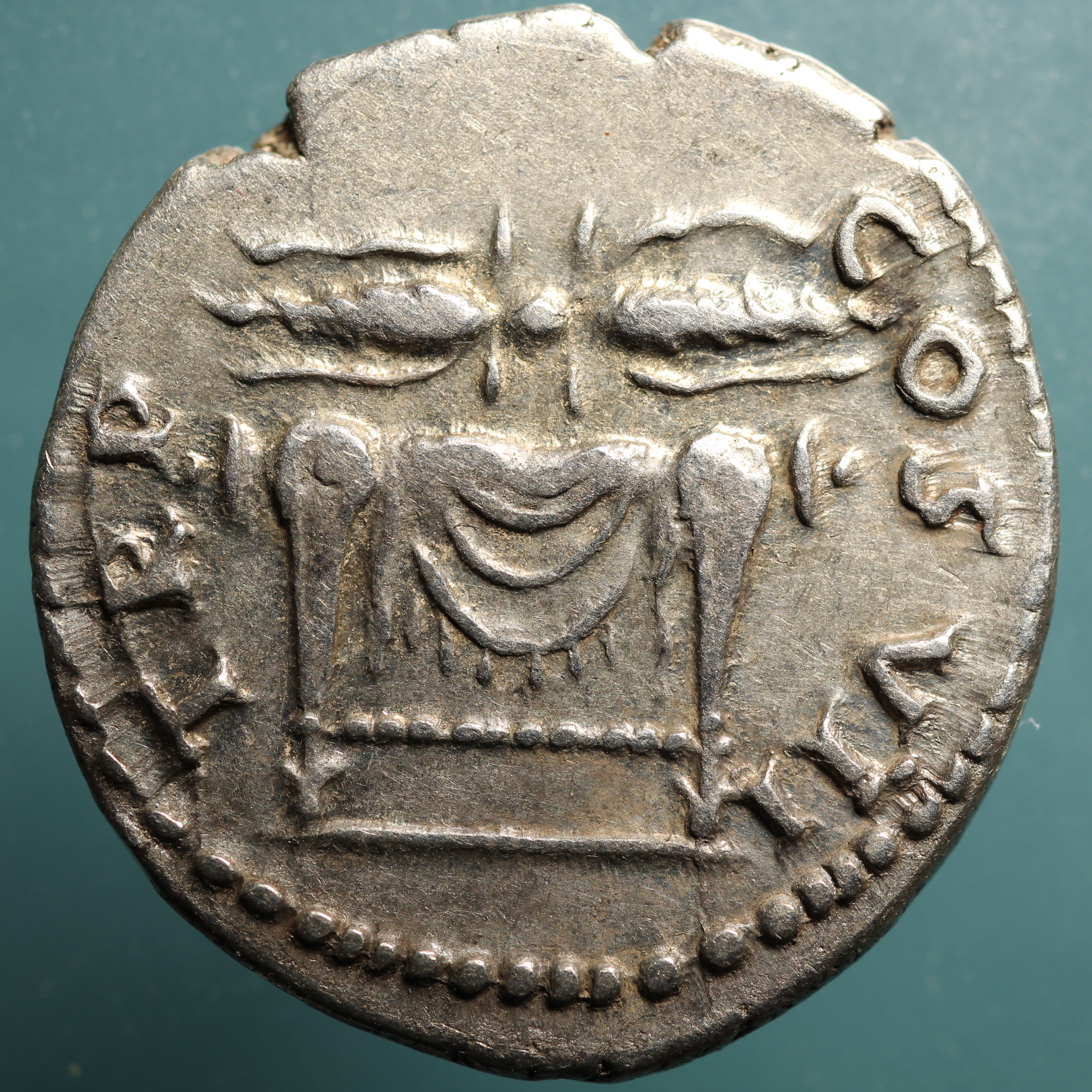 In the Fall of 2018 I wrote a four-part series of articles on the Commemorative Issue of 81 AD, what RIC refers to as Group 1.  (If anybody's interested they can be found by clicking the "Archives" button at the top of this page.)  This was before the purchase of the pictured coin, so at the end of the series I promised to write a fifth article when I could include an example of RIC 4 in the coll.  Whenever that happened I expected to write something about the thunderbolt on the pulvinarium representing Jupiter and the emperor standing in for Jupiter on Earth, etc., etc., etc., blah, blah, blah, but then I realized something.  Look at the thunderbolt--

It isn't winged.  RIC says it is, but it isn't.  I discovered this sometime ago actually, looking over the coll. of David Atherton, a friend of this website, who first brought it to my attention.  If you seek out out other examples, including RIC's own illustration, none of the thunderbolts have wings.  None of the RIC 4 thunderbolts anywhere have wings.  Therefore, my example isn't a var but a corr.

What does it mean though? 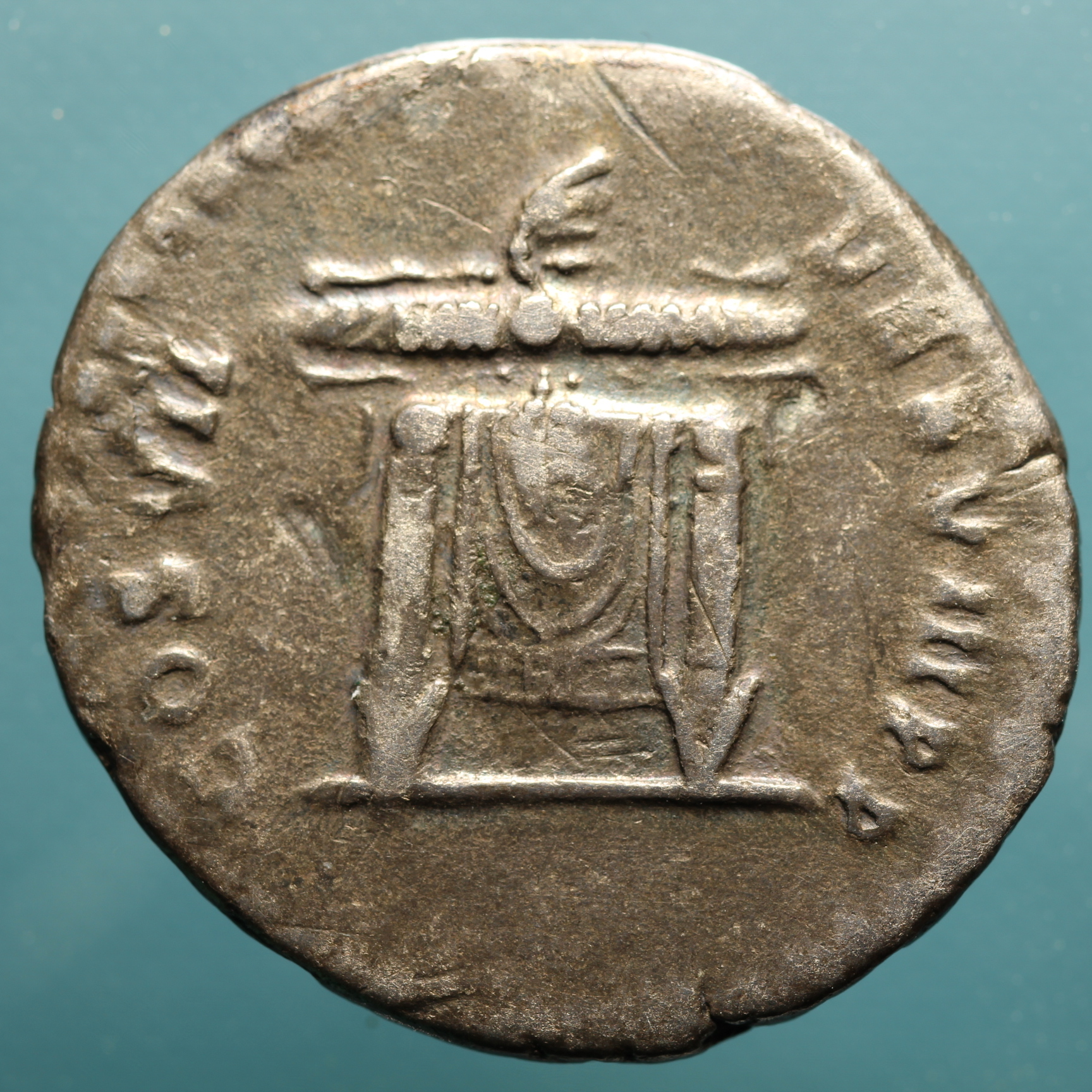 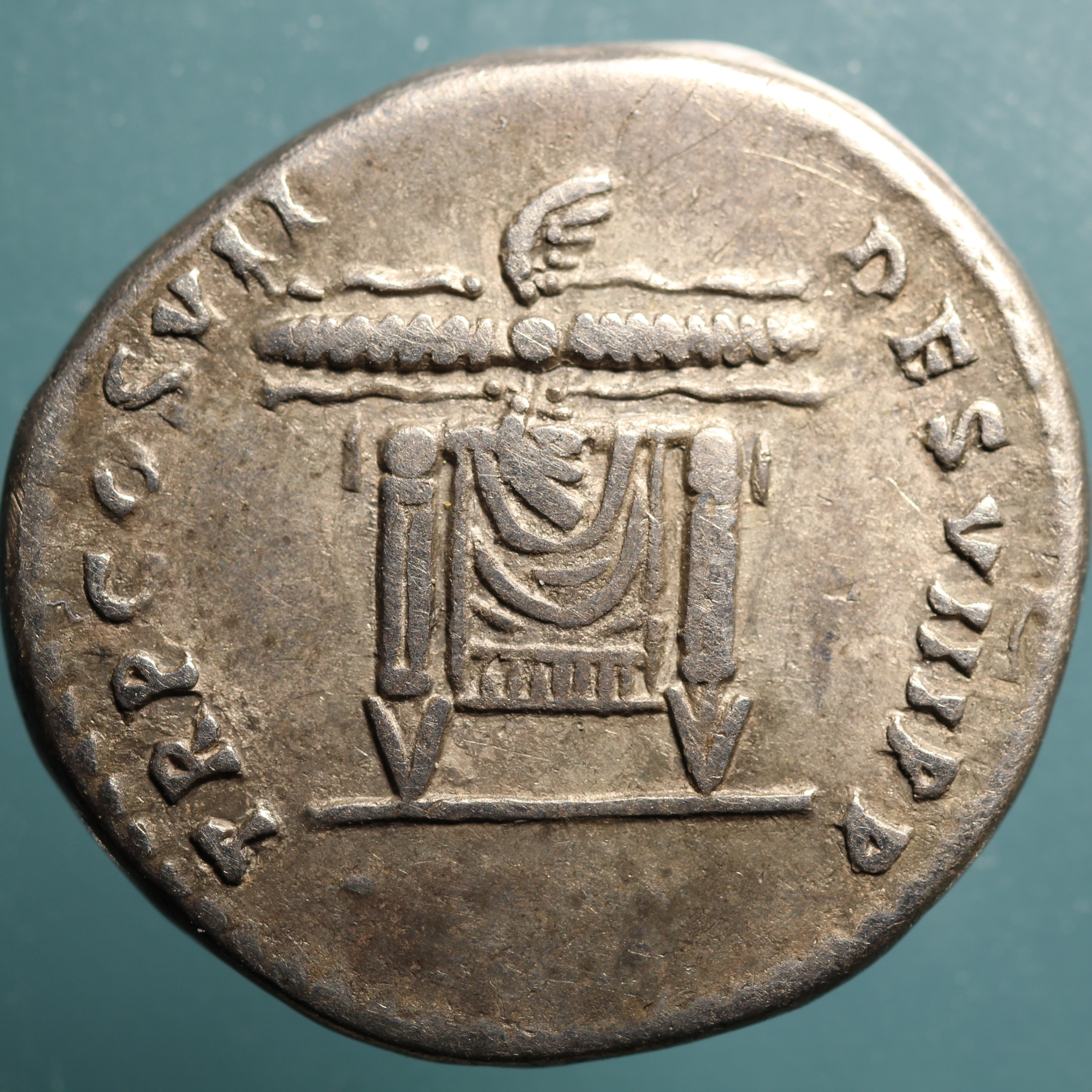 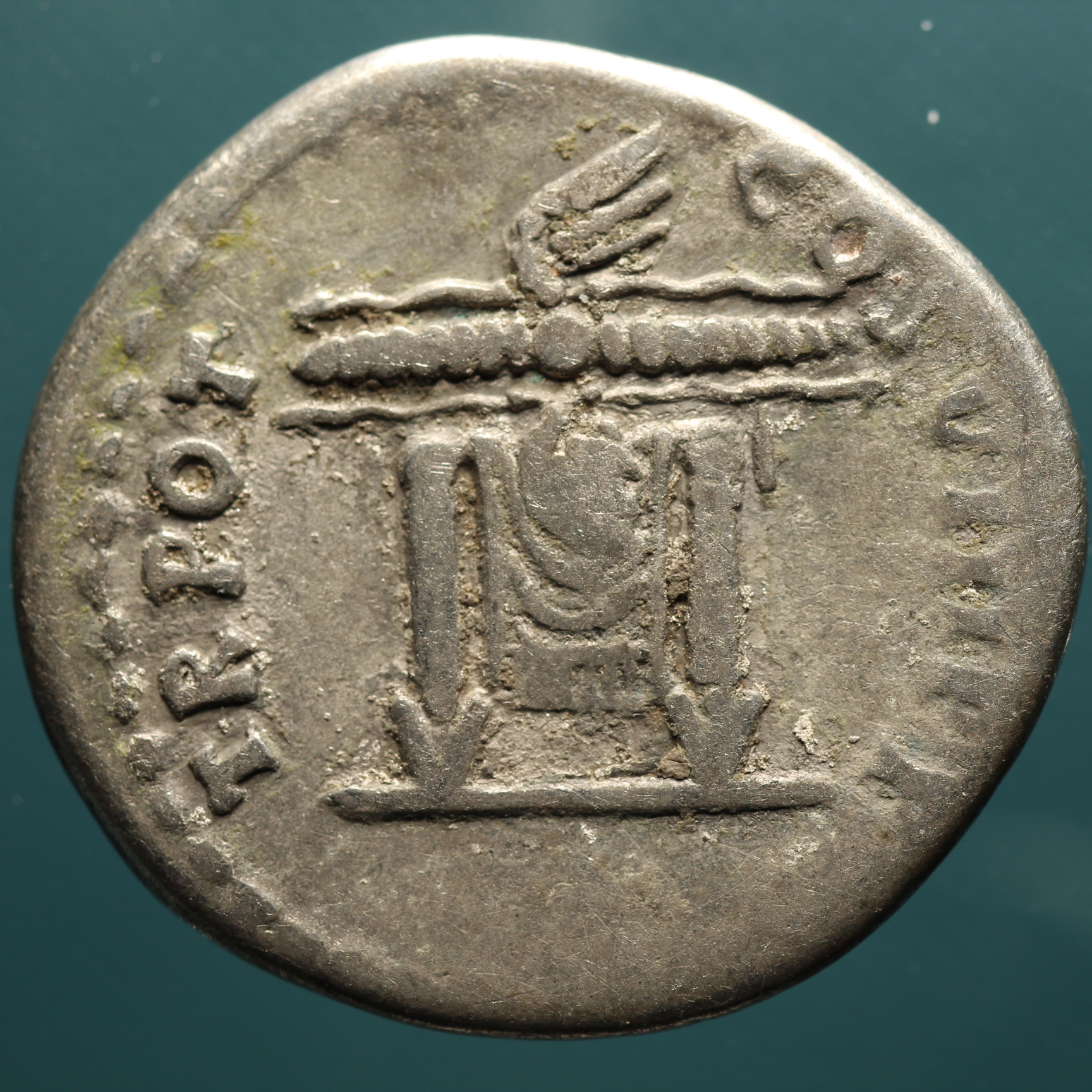 Second, this First Commemorative Issue, celebrating his award of TR P, tribunicia potestas, Tribunican Power, from the Plebian Assembly (not the Senate, thank you very much), seems to have been intensely personal to Domitian--I go into this in some depth in the four articles mentioned above.  Who else but the emperor himself could have commanded that the thunderbolt go wingless in this issue?  Whatever the significance of a wingless thunderbolt, the orders to produce it came from the very top.

Third, isn't it odd that Minerva, Domitian's own patron goddess, doesn't seem to to be represented in this very important, very personal, commemorative issue?  Sometime within the previous year, after the deification of his father Vespasian, while Caesar under Titus, Domitian struck coins with this reverse-- 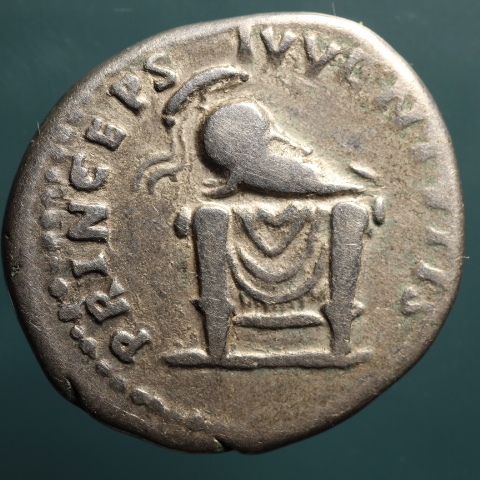 It shows Minerva's Corinthian helmet on a throne, obviously her pulvinarium.  Why isn't this reverse type included in the special issue of 81?  Wouldn't its inclusion have been a natural and even expected occurrence?  It would indeed!  So where is Minerva during all of this?

Here is another reverse from that same earlier period, with Domitian as Caesar under Titus-- 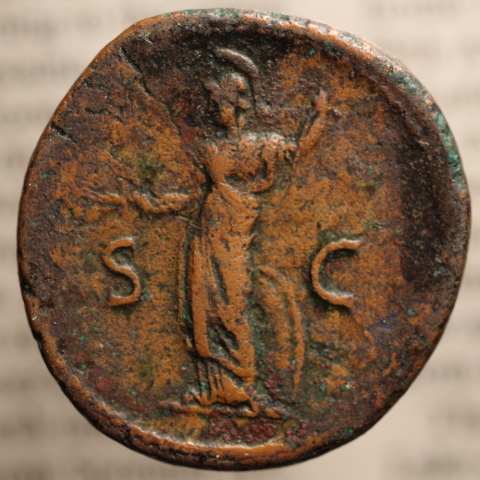 It shows Minerva holding a thunderbolt.  In a previous article I discussed the significance of this totally inappropriate attribute and the possibility that Minerva once appeared this way to Domitian in a dream.  This idea was prompted by the Suetonius quote at the top of the page where this weapon of her father is stripped away from her; in one dream she empowers Domitian, in another dream she dis-empowers him, that was my theory, still is my theory.

(Of course, Domitian's suggestion was ignored apparently, and the wingless thunderbolt never did replace the Corinthian helmet on the actual Circus Parade float.  If it had, Jupiter certainly would have called b.s. on the trademark infringement.)

Last week's article was about a recent acquisition, a Group 2 coin, and the article before that was about an obverse die match between two different Group 4 types.  Well, today we're back to Group 1.  Prof Ian Carradice once told me in an email, regarding the identification and explanation of types, that the Pulvinaria series deserved more consideration.  What a wise man he is!  The more time passes the more I agree with him.  If I had it all to do over again, I think I would limit my collecting interest to to the last three and a half months of 81 A.D.  There is so much there.

Prof Carradice adds in an email, "It is also worth noting that when the winged thunderbolt does rejoin, the issues also include two Minerva types not previously used on the gold and silver of D’s reign."  Excellent point.