Everybody does best in his own country.

Old age has a certain maturity which ought naturally, in its own time, to be perceived.

T WASN'T TOO MANY weeks ago we were looking at another Egyptian coin, with Harpocrates on the reverse.  I don't know, but there is something about these provincial coins, probably minted in Alexandria, which I find fascinating.  Lately the most famous collection of all, Dattari's, has started to come onto the market, and I have been trying to gather up my share, along with everybody else who collects Egyptian.  I presently own three Dattari coins, which is probably enough, because they certainly are pricey. 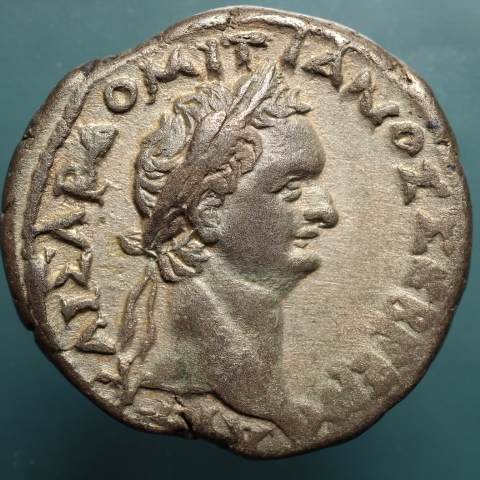 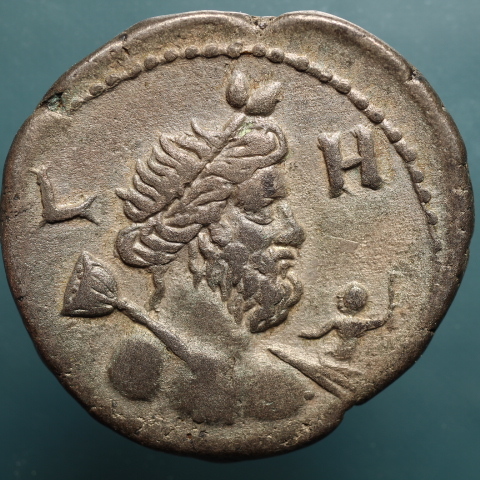 Like American coins today, the silver currency of Roman provincial Egypt was fiduciary, based on trust rather than actual precious metal content.  The tetradrachm was composed of billon, an alloy of silver and other metals, including copper and nickel.  This coin is only about 20% silver, according to Butcher and Ponting (The Metallurgy of Roman Silver Coinage, Cambridge, 2014).

The obverse shows Domitian facing right, wreathed in laurel.  The inscription is standard for the period.  The emperor looks bored, almost sleepy, as if he were trying to stifle a yawn, drowsy, drowsy. . . .

Huh?  Excuse me!  The reverse is much more interesting.  First of all we have the date.  H.  The year "eight," between August 29, 88 and August 28, 89 A.D., to be precise.  We know this because the Egyptian new year was celebrated on 1 Thoth, Aug. 29, the day the Nile predictably flooded its banks, providing the land with a fresh layer of soil and making Egypt the breadbasket of Rome.  Isn't that interesting!

We also have a person of some interest, the bearded Nile himself, male, like all rivers, and robust in his maturity; he is standing on the west bank, facing right and looking east.  On his head he wears a wreath of two lotus flowers still in bud, the symbol of Upper (southern) Egypt.  Over his right shoulder he carries as a scepter the papyrus reed, the symbol of Lower (northern) Egypt.  Rolling off his left shoulder and to our right, three lines of drapery transform themselves into the rippled surface of the Nile river (himself therefore).  And there in the water is the genius, the spirit, of the Nile (therefore himself again) swimming in the river!  The genius holds aloft something in his hand, a staff of some sort which we can't make out.  Perhaps it is something like this (a drawing after a tomb painting showing the lotus and the papyrus together as a symbol of a united Egypt; note the almost identical placement of the hand)--

(Alternatively, the bust of the Nile is wreathed with the the two buds of the lotus, the scepter over his shoulder is a lotus flower in full bloom, and the genius is carrying a papyrus reed staff.  It all depends how you want to read the scepter on the ol' man's shoulder.)

Next: Covering Domitian's Asses:  What's in a name?  That which we call a rose, etc.