Tell me, ferocious maiden, your helmet and spear are with you, so why don't you have your aegis on?  "Caesar's got it!" 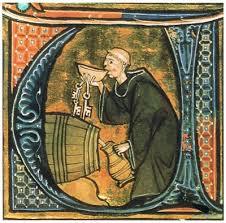 PON DOMITIAN'S TRIUMPHANT homecoming from Germany in the summer of 83 came the striking of two denarii, probably at the same time, one crediting Jupiter for the emperor's safe return, the other hinting at a possible health concern.  Here are RIC 144b and RIC 144(a)-- 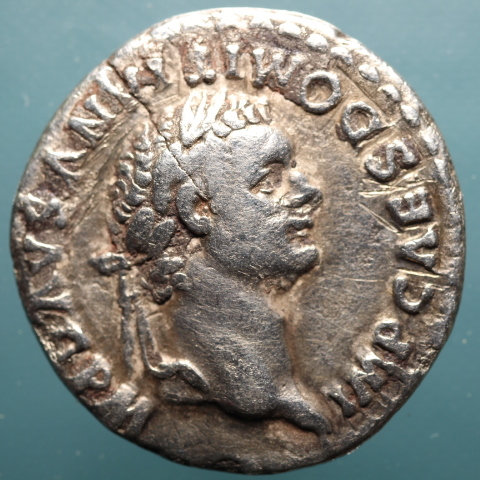 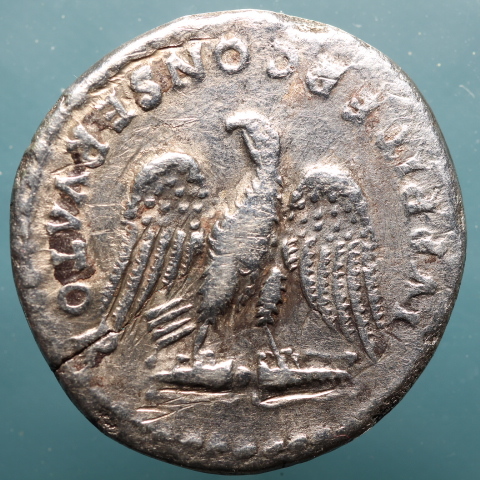 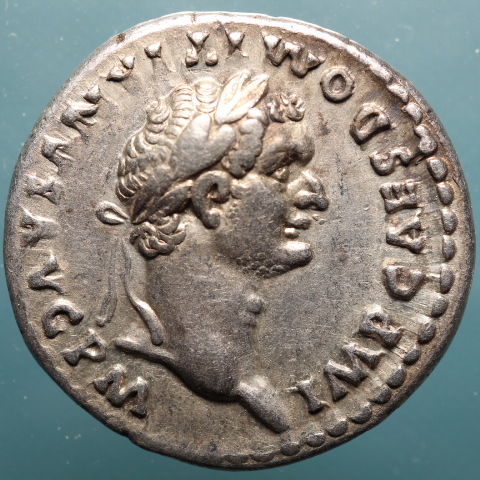 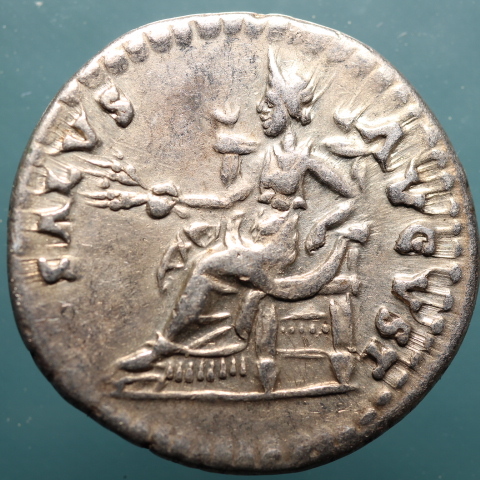 The reverse on the left reads IVPPITER CONSERVATOR, Juppiter conservator, Jupiter the Preserver; and on the right, SALVS AVGUST, salus Augusti, the emperor's safety or the emperor's health.  The Latin word salus can mean either health or safety, but in this case I believe it means health.  In my opinion Domitian picked up a serious wasting disease in the swamps of Germany, possibly polio.

Suetonius, writing in the second century describing Domitian's physical appearance, confirms this, "postea calvitio quoque deformis et obesitate ventris et crurum gracilitate, quae tamen ei valitudine longa remacruerant," (Lives of the Caesars, VIII.xviii.1), "later on, besides being deformed by baldness, he was both fat of stomach and spindly in the legs, which, however, had become emaciated after a long illness."

The portrait on the coinage changes at about this time as well.  Formerly a husky and robust young man, Domitian is now all of a sudden represented as thin and gaunt.  "Idealized," I've heard the new portrait described, but I'm afraid that's a modern view that really doesn't apply to the first century.  Here, from my non-coll. collection, is a numismatic portrait of the emperor Nero, who was't any sylph himself but was still considered extremely good-looking for his time (left), and on the right, from the coll., a "before shot" of Domitian (RIC 45), which can be compared to the after-shots on the two coins above-- 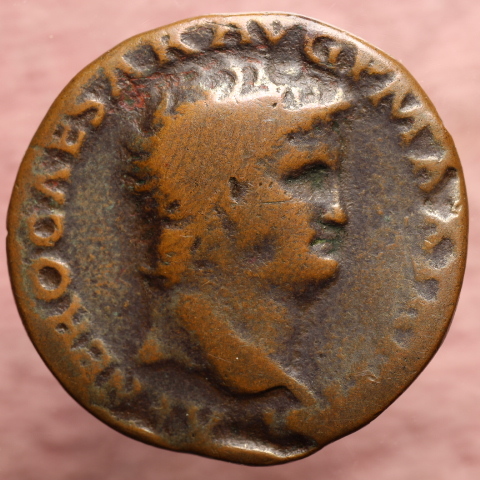 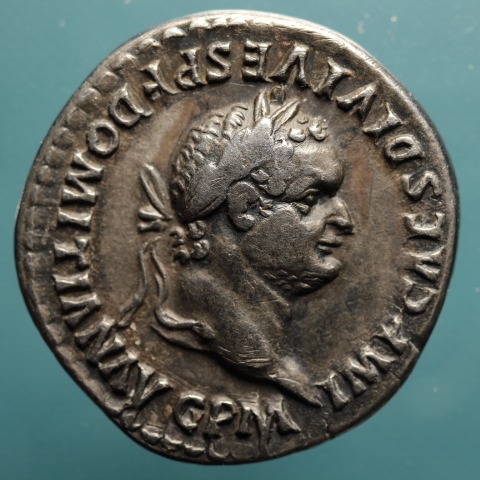 The emperor was gravely ill.  Domitian's medical team tended to take a holistic approach to his care, prescribing a course of public prayer and the topical application of a particular talisman.  Both of these remedies are recorded on the coinage.

There are no bronze coins dated that year (COS VIIII, 83 A.D).  Apparently the mint was closed, possibly for reorganization, possibly coinciding with the banishment of the mint master [the father of] Claudius Etruscus.  The first issue of 84 (COS X) includes among several reverse types the representation of an altar with the inscription SALVTI AVGVSTI, saluti Augusti, for the sake of the emperor's health.  Here is an unpublished as from that first issue of 84, RIC 209 var, calling on the public to pray for Domitian's recovery-- 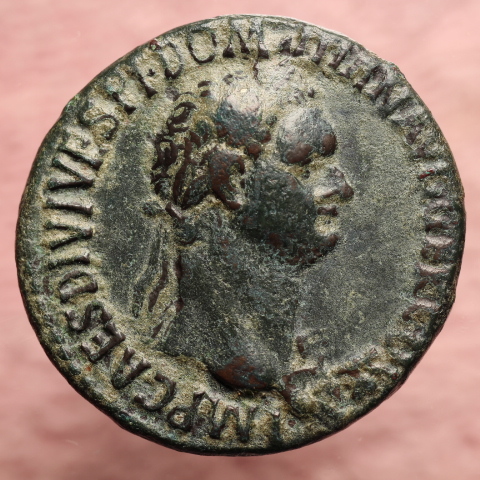 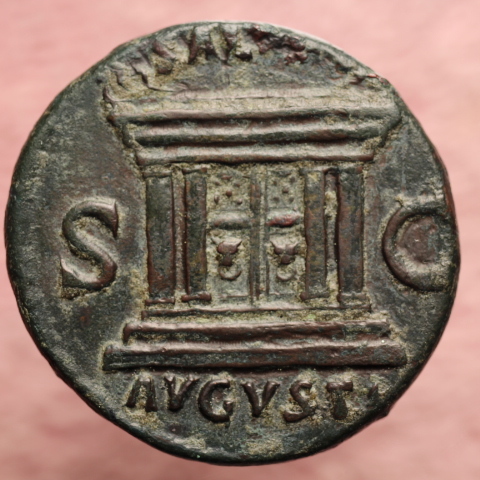 Public supplication continued throughout the following year (COS XI, 85) and then this altar reverse was discontinued.  In the meantime, halfway across the known world, the nominal King of Judaea Herod Agrippa II, a friend of the Flavian family, struck this coin, RPC 2266 (from the extensive coll. of Alberto Tricarico), adding his own prayers for the health of the emperor--

The other remedy referred to was a talisman called the "aegis" of Minerva.  Mythologically this was the head of the Medusa presented to Minerva by Perseus and added to a goatskin (or a monster-skin) cape which Minerva wore.  If this cape actually existed in ancient times the emperor of Rome would certainly have had access to it.  In any case we are talking about an actual physical object here (N.B. Martial's reference at the top of this page, dated by Friedländer's chronology to December of 84 or 85), possibly borrowed from the Temple of Jupiter on the Capitoline Hill.  It seems to have been worn on the sternum, attached by a beaded cord visible behind the wearer's neck.  That's the way it appears on the bronze coins of Domitian from 84 until the beginning of 87 when it was phased out.  Here are obverse examples from the Hazelton coll. for each of these four years:  from 84 (COS X), RIC 227; from 85 (COS XI), RIC 416; from 86 (COS XII), RIC 496 var; and from 87 (COS XIII), RIC 541 -- 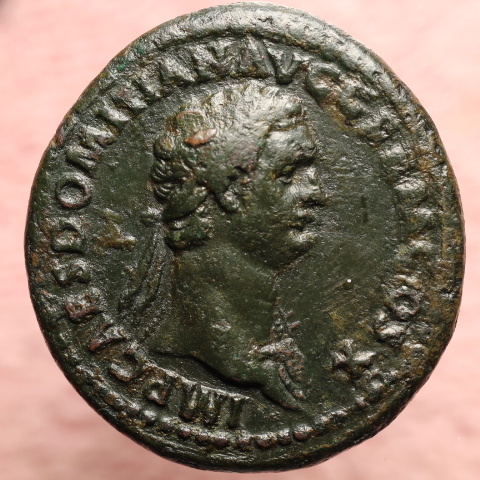 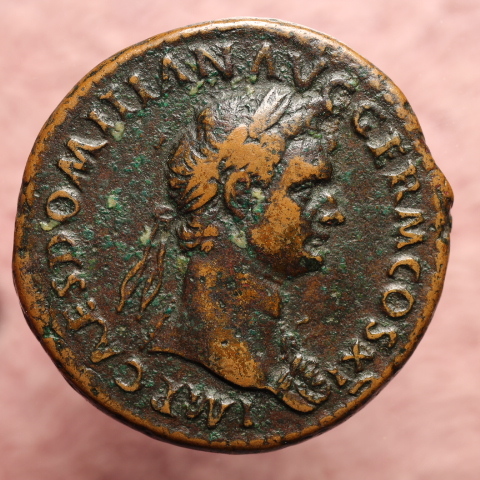 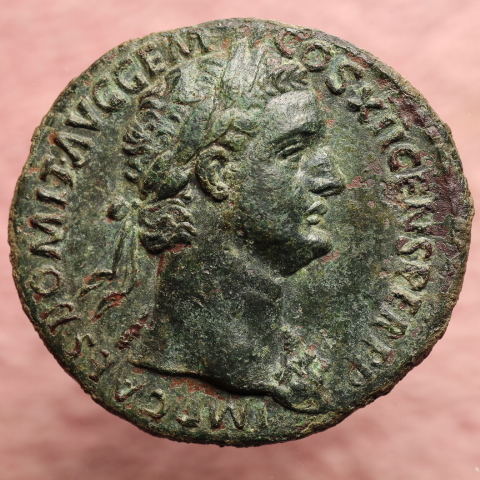 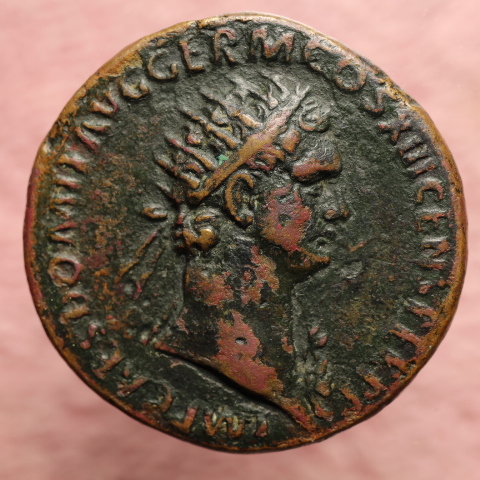 Only very rarely throughout the reign and apparently at random does the aegis appear on Domitian's coins in the precious metal issues.  Here are three from the coll., RIC 322, RIC 339, and RIC 576 var-- 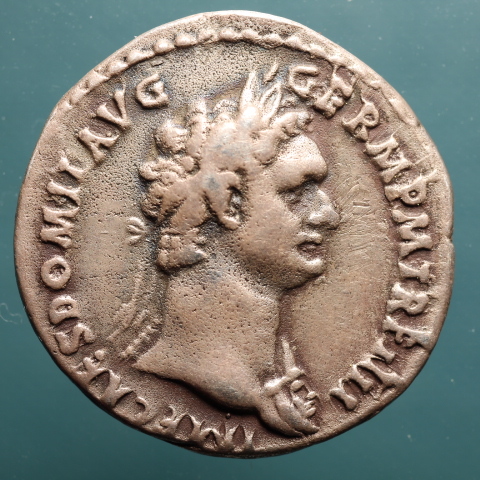 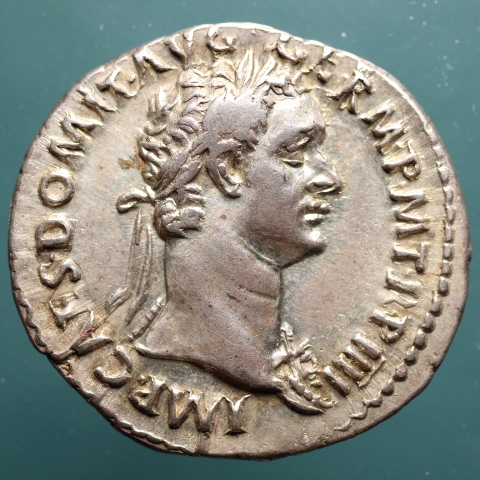 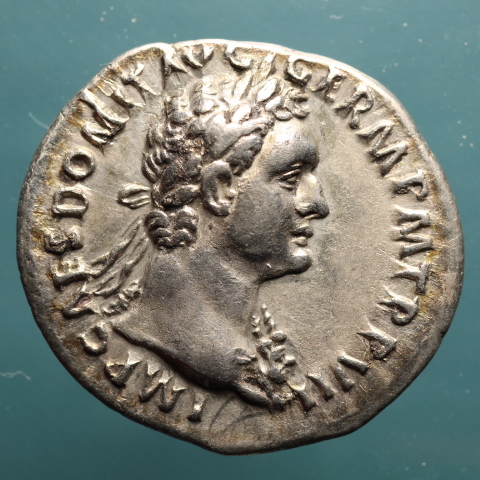 These aegis-bearing denarii are all extreme rarities.  As more of these specimens come to light perhaps a pattern will emerge.  Perhaps they're all birthday issues.  Wouldn't that be interesting!

After his cure was completed Domitian seems to have donated (or returned) the aegis amulet to Minerva as she was incarnated in Jupiter's temple on the Capitoline Hill, one of the so-called Capitoline Triad.  Oddly, Domitian seems to have donated the actual physical aegis while his portrait was still wearing it figuratively on the coins (that is, by the year 87, COS XII.  N.B. the reverse below on the left).  I am guessing that he felt sufficiently better by then and decided or was permitted to offer the amulet as a thanks offering while still fulfilling the pledged obligation on his coinage if not on his person.  Or else it simply took that long for the engravers to realize he wasn't wearing it anymore, which seems unlikely.

By the way, I plan to cover the topic of Minerva's Capitoline cult statue as it appears on the coins of Domitian more fully in a later blog article, but for now let me just hint at one of the more interesting points:  The statue itself seems to have endured a regular change of vestments from time to time, and this ritual re-wardrobing is reflected on the coins.  Moreover it seems that Domitian's aegis was henceforth to be included in the new rotation and appears occasionally throughout the rest of his reign.  Here are two rather wonderful examples from the coll., RIC 460 and RIC 511 (note the same beaded cord behind the goddess's neck)-- 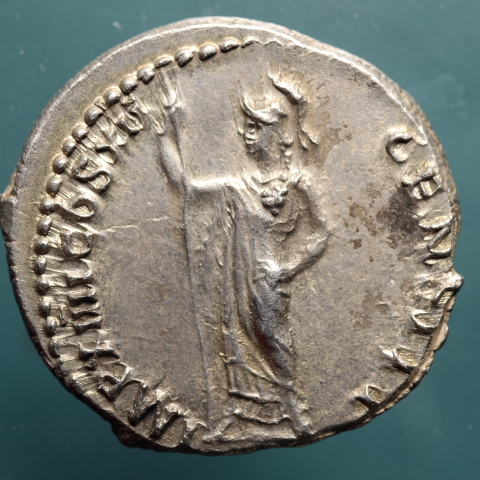 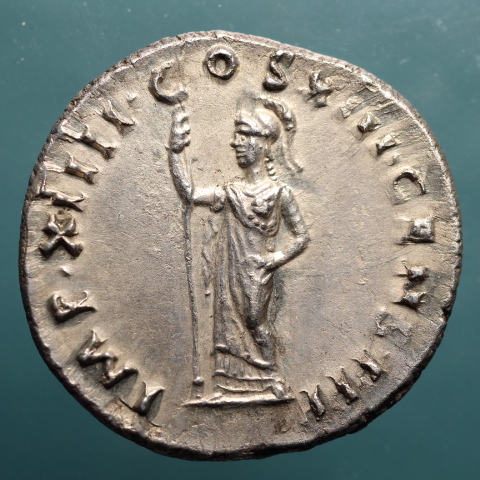 This article has been a while in the execution.  Thanks, everybody, for your patience.  I believe I finally have a good handle on photographing the bronze coinage, so I will now commence adding bronze coins to the website at my regular leisurely pace.