Parthians and Medes and Elamites and the residents of Mesopotamia, Judaea and also Cappadocia, Pontus and Asia, Phrygia and also Pamphylia, Egypt and that part of the Libyas belonging to Cyrene. and the Roman expatriates, Jews and also proselytes, Cretans and Arabs, don't we discern out of this babble, this bird-twitter, God's majesty in our own languages? 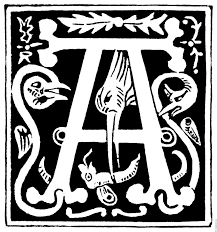 RE YOU WEARING RED TODAY?  I am.  It is Pentecost Sunday, the birthday of the Church, the day the Holy Spirit descended upon the disciples and transformed them from hopelessly dense and helpless disciples into wise and capable apostles.  Truly, a miracle indeed!

A half century after this first Christian Pentecost the Christian Church had already spread throughout the entire Jewish diaspora (as foreshadowed in the passage quoted above), including Pamphylia.  In fact Paul and Barnabas sailed to Perga, the capital of Pamphylia, on Paul's first missionary journey (Acts 13:1)  Later, from the time of Vespasian forward, Pamphylia was united administratively with the neighboring cities of the Lycian League into one province called Lycia-Pamphylia and placed under a single government, something Pamphylia had never quite been able to do on her own.

Under the Romans the Lycian League retained the right to mint silver drachmae, although the actual striking of the coins may have been carried out in Rome.  We deduce this possibility from the portrait style of the emperor and the fact that the weight of this particular series of drachma aligns closely with that of Domitian's denarius; furthermore the die axis, the orientational relationship between the obverse and the reverse sides of the coin, is six o'clock, the Roman fashion, the Greek being 12 o'clock.  Of course the obverse and reverse dies themselves along with the instructions pertaining to weight standards and die axes could have been forwarded to the Lycian mint easily enough.  Though we don't know for sure, this is probably what happened.  The most compelling evidence for a local minting is the silver composition of the coinage itself, about 3% less fine than the Roman standard. 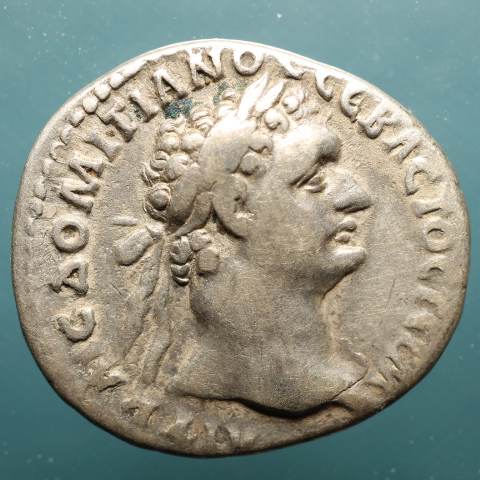 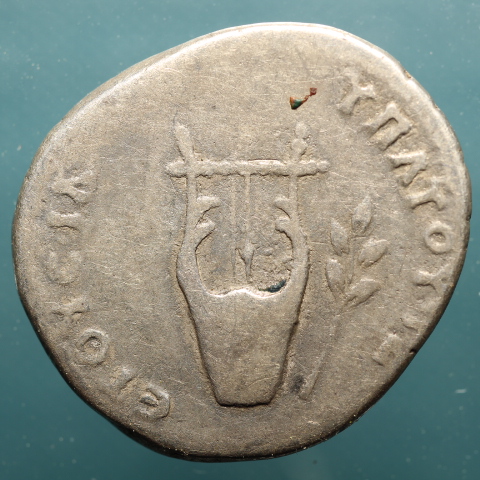 This first coin is RPC 1502.  On the obverse, the portrait of the emperor in Roman style, looking a little bit like "Q," I think, from Star Trek: TNG.  The inscription is Greek, Emperor Caesar Augustus Domitian Germanicus.  On the reverse, a lyre and a laurel branch to the right and the date in Greek, Year 14, 17th Consulship, 95 A.D. 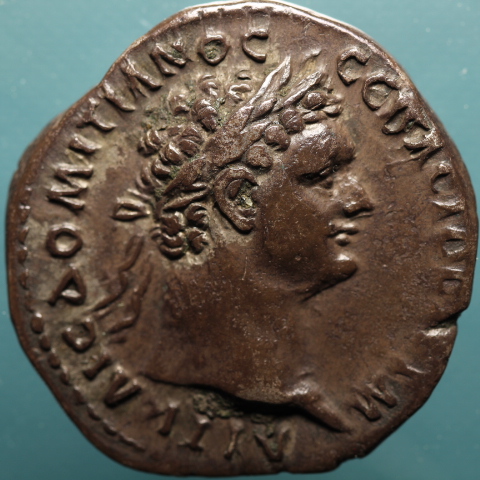 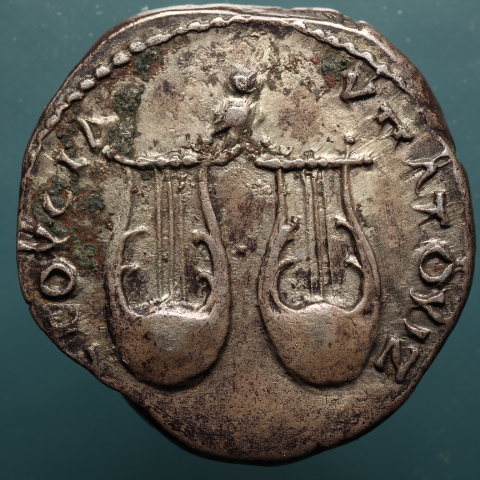 Next is RPC 1503.  On the reverse, two lyres, sacred to Apollo, patron deity of Lycia, but surmounted by an owl, sacred to Minerva.  Curious.  Curiouser, I bought this coin twice, the first time from one of Tom Cederlind's Buy/Bid sales.  He and I were in negotiation over payment when he passed away.  The coin was mislaid and I thought I'd never see it again.  Then it appeared in a CNG e-auction and I snapped it up. 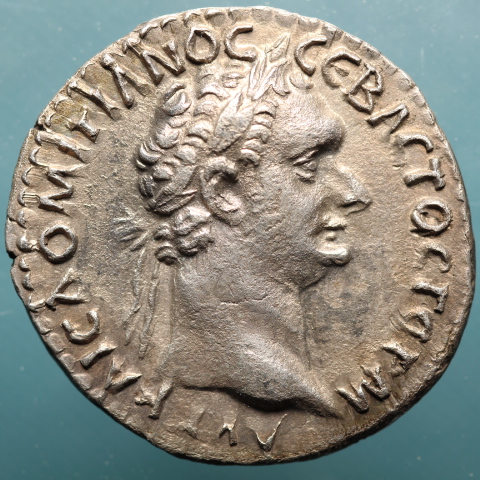 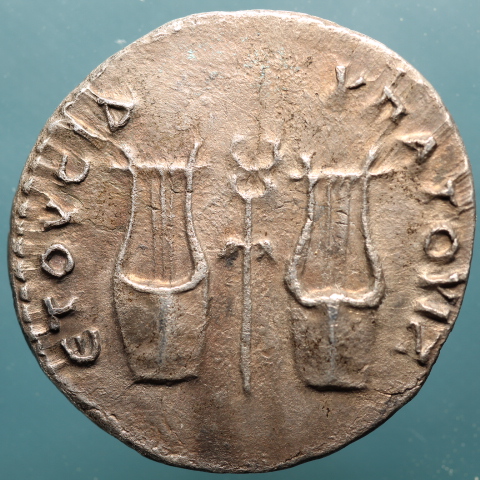 My last example is RPC 1504.  Note the muttonchop sideburns on the emperor culminating in a wisp of mustache.  On the reverse, the two lyres again, this time on either side of the caduceus, sacred to Mercury.  Another curious coin.

So here together in one blog article we have the confluence of three Greco-Roman gods, Apollo, Minerva, and Mercury, Star Trek: The Next Generation, the founding of the United States of America, and, in the third Person of the Trinity, Almighty God Himself.  A nice bit of work.  I wish for all of my readers a blessed and productive Pentecost season immersed in the Holy Spirit!

I very much enjoyed your latest article concerning Domitian’s Lycian drachms, not to mention the superb examples you have to demonstrate their beauty! I thought you would be interested to know that K. Butcher and M. Ponting’s metal analysis of the series show they have a fineness of 80%, the same level as contemporary cistophori - making these drachms worth a third of a cistophorus. Denarii after 85 were struck with a fineness of around 90%.
Keep up the interesting articles! I really did miss your hiatus.
David
Jim responds--
Thank you, David.  I certainly appreciate your expertise, your more up-to-date information, and also your kind compliments.  Your new figures would tend to support the local mint theory even more dramatically, a difference of 10% instead of 3%, and the fact that it actually matches the percentage in the cistophori.
© Jim Hazelton, 2018